Clara stood stoically, silently, as Jackson adjusted the belts. Tonight, she was going out with friends and Jackson didn’t want her to forget to whom she belonged. He had no intention of allowing her to forget her rules as she had the last time. She had come home with her lipstick smeared, smelling of beer and sex. He had no qualms with her fucking other people, but only with his permission. Tonight would be different. 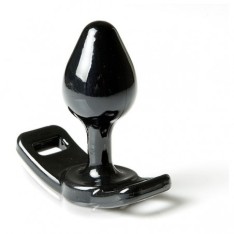 ny!  Only when she begged for mercy did he allow himself his own pleasure.

Ignoring her pleas, he inserted the plug while she was still nicely stretched from his cock. He then had her stand and tightly belted her waist placing a tiny lock on the buckle. Next, he looped leather straps through the slits of the plug and tied them securely to her waist belt.

Jackson had enough. He sat on the end of the bed and pulled her over his lap. Only when her ass was scarlet and her body soft did he relent. Turning her over he held her tight, told her he loved her too much to let anything happen to her. Loved her too much to take the risk of a repeat performance. Clara snuggled against him and whispered, “Perfect. I love you, too.”

He stood her on her feet and finished adjusting the straps. He wanted them tight enough to be felt, but not so tight as to mark her. The lock and complicated knots ensured that neither she nor her friends nor anyone else could free her from his security and protect.

Satisfied, he stepped back and kissed her. He watched as she finished dressing.

“Tell me our agreement,” he demanded.

Clara sighed, but smiled at him, then recited, “Only drink three beers. Have fun but be safe. No fucking anyone else without you present. Home by 1 a.m.”

“Exactly. Now, if you can follow those four simple rules, I’ll fuck that pretty pussy when you get home. If not, I’ll double the punishment from last time.”

Clara paled. He had caned her ass twelve times, placed a heavy locking plug in her ass for five hours, and grounded her – no leaving the house, no phone, no internet, no clothing – for three days.

Once she had left, Jackson sat on the couch and turned on the television. He grinned, hoping in the darkest part of his soul, that somehow, Clara would, indeed, break their agreement.