How in the hell can a 45 year old woman be grounded?? But, I am. First I broke one of our

Then, I broke a House Rules

First, I forgot to wear the pearl necklace/collar when I was out grocery shopping. Milord came home before I did and noticed immediately that it was missing. Then, when he asked about it, I told him the clasp was loose. I have no idea why I said this, but I should have expected him to order me to retrieve it so he could inspect the damage. Naturally, the clasp was perfectly fine.  I admitted, finally, that I had simply forgotten to put it on. He looked so sad by this that I dropped to my knees, pressed my forehead against his crotched and begged forgiviness. He did forgive me, of course, but decided that one of my punishments would be two days of being grounded, confined to the house, and able to wear only a body harness with the cuffs attached. After the two days, I’d still wear the harness beneath my clothing (when I left the house). When I was in 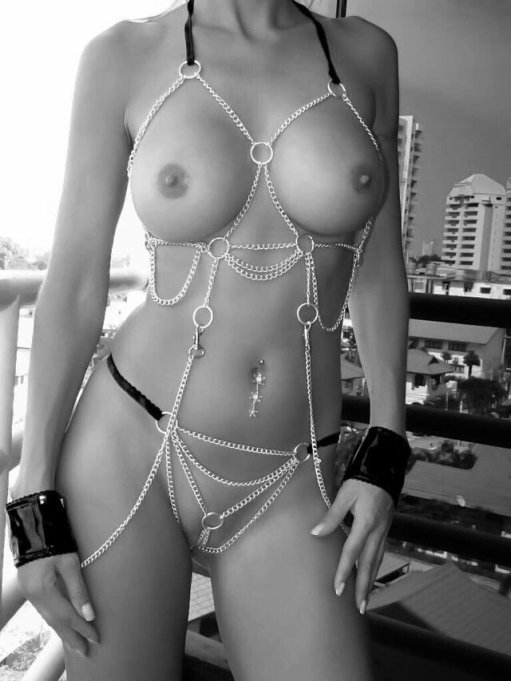 the house, I’d be stripped of clothing. I nodded, accepting his decree. He then unzipped his trousers and allowed me to suck on his dick. Rather than coming in my mouth, though, he pulled out and covered my face with his sweet cum, not allowing me to taste it whatsoever.  He helped me to my feet, and told me to strip. I did immediately. No way in hell was I even considering disobeyeing!! He helped me put on the harness and attached the chains of the cuffs to one of the metal circles. I could move easily, but awkwardly. “Go,” he said quietly. “turn down the bed.” I quickly did as he said. He Kissed me, claiming my mouth. I melted against him. He made love to me, gently, slowly, taking his time to enjoy and allow me to enjoy. When he separated the twin chains pressed against my labia and entered me, stars exploded behind my eyes. Eventually, he too orgasmed, this time inside of me. The cum he had sprayed on my face was dried, pulling at my skin, but I loved it. This morning, he again made love to me. Twice today he has texted me, ordering me to send him a selfie, which I did. The chains are cold, somewhat awkward, and a tad bit uncomfortable, but they do remind me that I am his. I think I could grow to like them. A Lot!